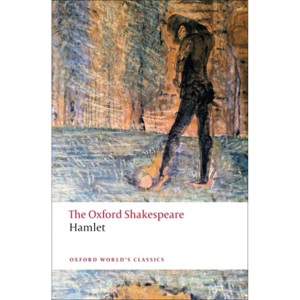 I returned to Shakespeare for my twenty-fourth book with Hamlet.  Despite being his most famous tragedy, I had not read it prior to the past two days.  The play tells the story of Hamlet, Prince of Denmark, following the death of his father and the subsequent marriage of his mother to his uncle.  This makes his uncle, Claudius, the new king.  Hamlet learns from the ghost of his dead father that he was murdered by Claudius, and that the queen, Gertrude, was privy to the plot.  Hamlet vows revenge on his uncle and proceeds to plot the best course of action.  He decides that a feigned madness will cover any suspicions the new king might have regarding his loyalty, and assumes the role of madman.  Tragedy ensues as intentions are misunderstood and innocent lives are taken by mistake.  Hamlet and his entire family are eventually killed, leaving only one friend to relate his sad tale.

As is evident in all of his plays, Shakespeare is an expert at characterization.  In that regard, Hamlet is his masterpiece.  The line between real and feigned madness is blurred as the depths of Hamlet’s rage and grief are explored.  The play poses a number of major questions, including how to distinguish between legitimate revenge and simple murder.  This play is a must for all fans of Shakespeare.  I am glad to no longer be ashamed for not having read it.

1 thought on “#24: Hamlet by William Shakespeare”