For my thirtieth book, I indulged one of my many obsessions– The Sistine Chapel.  For nearly as long as I can remember, I have been consumed by a curiosity about and a desire to visit this incredible place.  Michelangelo’s ceiling is indisputably one of the greatest achievements by any individual in human history.  I have never seen it in person, but even in reproduction the artwork is stunning.  I am not exaggerating when I say that I dream about the Sistine ceiling many nights.  Fortunately, my wife has accepted a life that includes my many quirks and unusual preoccupations.

The Sistine Secrets: Michelangelo’s Forbidden Messages in the Heart of the Vatican by Benjamin Blech and Roy Doliner is an intriguing book.  It’s thesis is that Michelangelo encoded a number of secret messages in his Sistine artworks.  These messages are largely based on knowledge of Jewish scriptural tradition and Kabbalah that Michelangelo obtained during his years in the liberal-minded household of Lorenzo de’ Medici.  The authors support their arguments with visual evidence from Michelangelo’s paintings (including some details revealed by the extensive cleaning of the frescoes at the end of the last century) and clues from Michelangelo’s personal history and writings.  Their arguments are well-reasoned and well-documented.  Overall, the book  is a fascinating new look at the greatest works of art by the greatest artist in history. 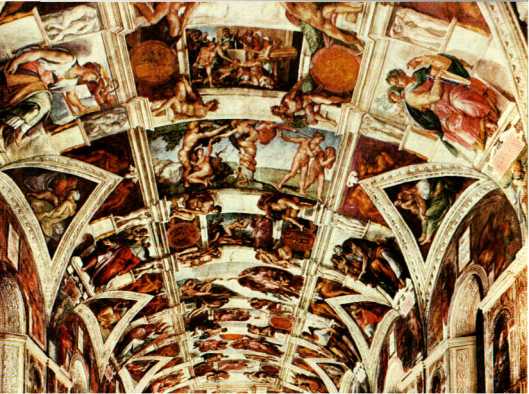 That said, I do not necessarily agree with all of the interpretations offered by the authors.  This book suffers from the same weakness as nearly all books that offer interpretations of art, music, film, or literature.  The problem is tunnel vision.  Such works become so focused on their thesis that they ignore all other possibilities.  Tunnel vision is necessary to some degree, but an author should still acknowledge the possibility of other correct interpretations.  Michelangelo is long dead and left no clear indication of his intentions when painting the ceiling.  For that reason, no argument can definitively prove the artist’s purpose.  Blech and Doliner make a very strong case, and many of their interpretations seem indisputable.  My only complaint is that they don’t acknowledge other possibilities.

2 thoughts on “#30: The Sistine Secrets by Blech and Doliner”