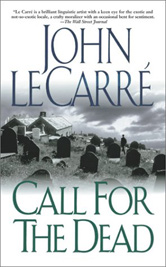 I returned to John Le Carré for book thirty-eight with Call For The Dead.  I previously read The Spy Who Came in from the Cold and reviewed it here.  Le Carré is known as one of the great espionage writers, but that doesn’t do him justice.  Call For The Dead, Le Carré’s first novel, is part thriller, part spy story, and part classic whodunnit.  It introduces the character George Smiley, the everyman spy who is much more believable and sympathetic than Ian Fleming’s debonair James Bond.  What distinguishes Le Carré from other authors in this genre is his masterful use of the English language.  His writing is precise and witty, and does not get bogged down by extraneous detail (as do so many other thriller writers).  Le Carré tells the story in an unassuming, straightforward fashion.  The result is wonderfully entertaining.  Many thanks to my friend Luke Walker for the recommendation.