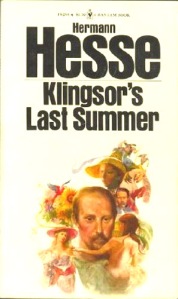 After wrestling with a book of stories from Thomas Mann without much success, I decided to return to one of my favorite authors, Hermann Hesse.  I chose one of his few works that I have not yet read, Klingsor’s Last Summer.  This book is actually a collection of three novellas: A Child’s Heart, Klein and Wagner, and the titular story of Klingsor.  Each story is excellent.

A Child’s Heart recounts a young boy’s theft of some candies from his father’s room and his subsequent tormenting guilt leading up to being confronted by his father.  This story does a wonderful job of capturing the deep and powerful emotions of which a child is capable, and the uncertainty that accompanies these often new sensations.  It reminded me of Augustine’s story of stealing from the pear tree, but Hesse presents the feelings through the eyes of a child, whereas Augustine is a grown man looking back.  The power of Hesse’s story is how instantly recognizable and relatable the feelings of the main character are to all readers.

Klein and Wagner was my favorite story in the book.  In it, a man flees from his middle-class life after embezzling a large sum of money in his position as a minor government official.  He struggles with the causes of his abrupt resort to crime and with the strange new world that confronts him in the absence of his former principles of right and wrong.  The struggle between individual desires and the rules of society drive the narrator to despair and ultimately to suicide.  Again, Hesse’s ability to put the reader in the shoes of the narrator is remarkable.

The final story tells about a famous painter named Klingsor as he experiences a final burst of creativity in his last summer of life.  He grabs the cup of life with both hands and drinks until he simply cannot take any more.  The reader feels transported to Klingsor’s side as he attempts to embrace the wonders of life and nature with his entire being, only to accept that his time is nearly up.

Hesse is an author who writes in a language that is both emotional and spiritual.  His characters and their crises have a sincerity that can only come from the author’s own experiences.  The thing I love most about his work is the feeling of spiritual connectedness that all of his writings seem to exude.  To Hesse, all of us are linked through the divine spark within, regardless of race, religion, or social standing.  The key to happiness, for his characters and for his readers, is the recognition of the divinity within and the acceptance of the transitory nature of the physical world.