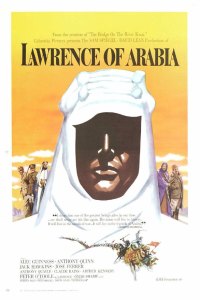 Today I inaugurate a new series– Page to Screen.  In these posts I will look at classic books that have been made into movies and cinematic masterworks that began as books.  For the first installment, I have selected one of my all time favorite movies– Lawrence of Arabia.

Thomas Edward Lawrence began World War I as a minor officer assigned to the British Army staff at Cairo.  Due to his expert knowledge of Arabian language and culture, Lawrence was assigned as an adviser to the Arab uprising against the Turkish Empire led by Emir Feisal, a son of the Sherif of Mecca.  Although under Feisal’s nominal command, Lawrence was the operational leader of the revolt.  Under his guidance, the Arabs successfully waged a wide-ranging guerilla campaign against the Turks.  Lawrence eventually led the Arabs in the capture of Damascus.  An ambitious American journalist publicized Lawrence’s exploits, making him a hero celebrated around the world.

Few films have achieved the popular and critical acclaim enjoyed by Lawrence of Arabia.  The American Film Institute listed Lawrence as the #5 film of all time on its 1998 100 Years… 100 Movies list, and at #7 on the 2007 list.  This movie is widely acknowledged as one of the greatest cinematic productions of all time, and deservedly so.  David Lean’s direction manages to convey both the underlying desperation of the Arab revolt and the dynamic relationships between the main characters built on bravado in the face of that desperation.  Some directors are too heavy-handed with their actors, leading to films that seem less than natural.  Lean avoids this pitfall and the result is marvelous.  He is helped in this regard by a truly incredible cast.

Peter O’Toole is phenomenal as the complicated Lawrence.  His Lawrence is charming and intelligent, bold and courageous on the one hand, while painfully lonely and uncertain about his abilities on the other.  O’Toole portrays a real man in all of his complexity rather than a heroic caricature.  The other actors are equally wonderful.  Omar Sharif is the handsome and earnest Sherif Ali, while Anthony Quinn is the combative and rugged Auda abu Tayi.  Both performances rank among the all-time greats.  Again we see real people on the screen where lesser actors would have offered mere character sketches.  Finally, Alec Guinness as Prince Feisal brings a dignity and gravitas to a role that could have been forgettable in less capable hands.

The cinematography and the score push the movie into the cinematic elite.  The film is visually stunning, with the camera work highlighting the desolate beauty of the desert landscape.  Maurice Jarre’s score adds to the emotional impact without distracting from those stunning visuals.  The soundtrack has a signature melody that is instantly recognizable.  The script simplifies and combines many of the historical characters and events involved, but perfectly captures the spirit of Lawrence and his enterprise.

To be fair, this movie is very long and moves slowly at times.  If you aren’t the type to appreciate long, artistic landscape shots to set the scene for later action, you will want the remote nearby to fast forward through a few sections.  That said, SEE THIS MOVIE!!!  It is everything that a historical epic should be, and few other movies come close. 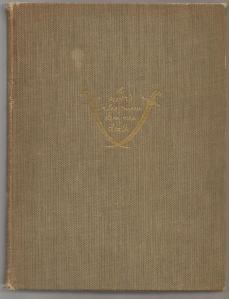 Compared to the tremendous popularity of the film, the book behind the movie is relatively unknown.  T.E. Lawrence was encouraged by many friends and admirers to write his own account of the Arab uprising against the Turks.  The result was Seven Pillars of Wisdom.  This book is one of the most remarkable pieces of writing that I have ever encountered.  Part history and part autobiography.  Part novel and part philosophical treatise.  Part anthropological study and part guerilla warfare handbook.  Part travel guide and part confession.  This book is as complicated as its author.

Lawrence has a wonderful gift for capturing landscapes and personalities but is often extremely verbose.  The result is a captivating book that is very, very long and very, very detailed.  If you think the long desert shots in the movie were tiresome, try reading fifty pages describing those same scenes.  The prose is beautiful and the descriptions are evocative.  The problem is that Lawrence describes every journey in this detail, and every lava formation, and every canyon.  The action scenes are better, with Lawrence conveying the emotions that accompanied his various triumphs and setbacks with sincerity and grace.  His cultural analysis of the Arabs and their various religious and tribal associations is insightful and useful reading in a world so focused on Middle Eastern tensions.

The downside to this book is its length.  At nearly 700 very large pages, it is quite an undertaking.  Lawrence’s writing is not conducive to burning through the pages.  Ultimately, I would recommend this book to anyone seriously interested in Lawrence or Arabia in general, but not if you are looking for a casual read.  The abridged Revolt in the Desert would be a better idea for the casual reader.  If you do choose to read this book, try to find an old copy.  The newer paperback editions are fine, but the old hardback has a heft to it that seems appropriate to the subject.  The text is accompanied by some great illustrations that really add to the reading experience.  My own worn copy is pictured above, and it is one of my favorite old books.

My Pick: The Movie

In the end, I would have to choose the movie over the book.  I loved reading Lawrence’s account, but it took me over a month to get through it.  The movie is truly a masterpiece.  The directing, the acting, and the cinematography are unbelievable.  If you have never seen it, rent it today!