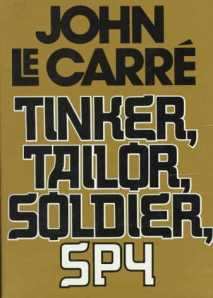 After the intellectual workout of reading Kierkegaard’s Fear and Trembling, I decided to read something a bit less exhausting and more purely entertaining.  Fortunately, I had on my shelf one more novel by John Le Carré– Tinker, Tailor, Soldier, Spy.  This is another espionage classic from Le Carré, himself a former intelligence operative.

Tinker, Tailor once again features the everyman spy, George Smiley, who finds himself drawn out of retirement to hunt a Soviet mole in the upper echelons of Britain’s spy agency.  There are four primary suspects, and the book follows Smiley’s efforts to discover the guilty party.  Along the way he deals with his own feelings of disappointment and despair in the face of his wife’s infidelities and his inevitable aging.  This novel is a quick read despite being over 300 pages, and is highly entertaining.  Le Carré does an excellent job of building suspense as Smiley laboriously uncovers the traitor’s identity.  The last 150 pages are impossible to put down.  In contrast to many other thriller/espionage writers, Le Carré uses only the words he actually needs to convey any particular scene.  So rather than getting a decent plot dressed up in words clearly out of a thesaurus (I’m looking at you, Clive Cussler), the reader gets an excellent plot served up without ostentation.

The one drawback to Le Carré’s writing is that it relies very heavily on the jargon of the British spy agency of his day, meaning the average modern American reader may have trouble keeping up with some of the action.  A bit of effort at the beginning (and the use of the internet on occasion) is more than enough to overcome this small obstacle.  This book was highly entertaining and is a must read for fans of the espionage genre.  I also look forward to the upcoming film version, starring Gary Oldman and Colin Firth.