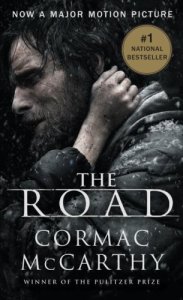 For my seventy-third book I chose The Road by Cormac McCarthy.  I saw the film version of this novel in theaters a few years ago and was blown away.  The movie inspired me to read the novel, and only two short years later I finally did so.

The Road tells the story of a father and son struggling to survive in a post-apocalyptic world.  Some unknown cataclysm has wiped out most of the life on Earth and destroyed civilization.  Most of the few remaining humans have resorted to cannibalism.  The father struggles to keep both his son and his belief in goodness alive.  He recognizes that they will not survive another winter in their current location, and the two begin to travel along the empty roads towards the sea.  Along the way they encounter scenes that show how far mankind has descended into barbarism.  They reach the sea but their situation does not improve.  The father eventually dies, leaving the boy alone.  Another man, with a wife and two children, convinces the boy that he is also one of the good guys.  The novel closes with the boy joining this family, but keeping the memory of his father alive.

This book is amazing.  It is a powerful story of filial love and paternal devotion.  McCarthy’s prose is as bare as the landscape it depicts, giving it a style reminiscent of Hemingway.  The two main characters are referred to in the third person throughout, known only as ‘the man’ or ‘the father’ and ‘the boy’ or ‘the son’.  This highlights both the loss of social identity with the downfall of society and the universality of parental love.  The Road is a quick read and is incredibly engrossing.  This is easily one of the best books I have ever read, and I cannot recommend it enough.