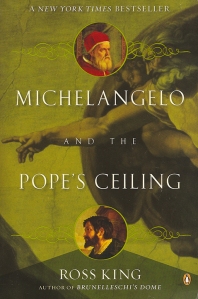 The celebrated German writer Goethe once said that “Without having seen the Sistine Chapel one can form no appreciable idea of what one man is capable of achieving.”  Michelangelo Buonarroti’s fresco cycle on the Sistine ceiling is an accomplishment that transcends the artistic.  It is a landmark achievement that has become deeply embedded in the fabric of Western culture.  Many of the individual elements of the frescoes have become celebrated works of art in their own rights.  The ceiling as a whole is a staggering example of Michelangelo’s talent and willpower.  In honor of Michelangelo’s 537th birthday this past Tuesday, I decided to read a book about my favorite artist (and my favorite ninja turtle).

Ross King’s Michelangelo and the Pope’s Ceiling tells the story of how Michelangelo, renowned as a sculptural genius but inexperienced as a frescoist, came to paint the single greatest artwork ever created.  It features a cast of characters that includes the warrior-pope Julius II, artistic greats Leonardo and Raphael, and a host of priests, kings, and noblemen.  King’s writing is entertaining and the book is well researched.  It very clearly relies more on the scholarship of others than that of the author, but King weaves all of the various elements of the story together in a highly engaging manner.  The book is a popular history rather than an academic one and should be judged accordingly.  As a popular history, this book excels.

Ultimately, the star of the book is Michelangelo.  His accomplishments in the Sistine Chapel are simply incredible.  Add to that his various sculptural, architechtural, and pictoral works, and you have greatest artist of all time.  King’s book destroys the romantic image of a solitary Michelangelo slaving away on his back (he had a team of assistants and was able to stand while painting), but the real story is even more interesting.  I have read quite a few books on Michelangelo (both academic and popular), and King’s is one of the most entertaining.  If you have an academic interest in Michelangelo, there are more thorough treatments, but for the amateur enthusiast King’s book is an excellent choice.