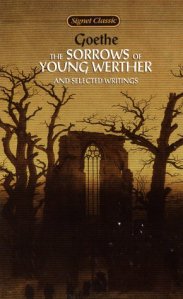 Remember that friend from college that always seemed to have girl problems to complain about? (I’m talking about you Lance.  Thank goodness Sabrina put an end to your relationship woes, they were getting old.)  German literary giant Johann Wolfgang von Goethe offers that friend multiplied by 1,000 in The Sorrows of Young Werther.

Werther was the novel that established Goethe as an international celebrity, and with good reason.  It tells the story of Werther, a young artist spending time in a rural German village.  The book consists of a series of letters from Werther to his friend Wilhelm that detail his stay in the village.  Soon after arriving in the village Werther becomes acquainted with a beautiful young woman named Charlotte.  Despite being warned that she is engaged to a man who will return shortly, Werther begins to fall in love.  He befriends Charlotte and becomes more smitten every day.  Eventually her fiancée, Albert, returns.  Albert and Werther also become close friends.  The triangular friendship continues for several months with Werther increasingly tormented by his love.  His despair eventually becomes so great that he leaves the village and accepts an official position with an ambassador in Weimar.  Werther suffers a great social embarrassment in Weimar and returns to the village to discover that Charlotte and Albert have married during his absence.  Werther’s love is a greater torture than before and his relationship with Albert suffers as a result.  Eventually Charlotte asks Werther not to visit so often.  Filled with an unbearable despair, Werther visits Charlotte a final time and both are overcome with emotion after he recites a piece of a poem he has translated.  They embrace and kiss, but Charlotte realizes her mistake and asks Werther to leave.  Werther returns home, pens a farewell letter, and shoots himself.

In case the title and that summary weren’t clear, this is not a happy book.  It is, however, an excellent book.  The unbridled passions of Werther established this novel as a precursor and source of inspiration for the Romantic movement that would follow.  Goethe crafts a story in which we agonize alongside Werther, and his ultimate demise serves as a cautionary tale for all passionate young men.  The novel’s impact was so great that it inspired “Werther-Fieber” (Werther Fever), which saw young men across Europe dressing in the style described as Werther’s, and also led to a rash of copycat suicides by forlorn young lovers.  Even with the risk of Werther-Fieber, this novel is worth a read.