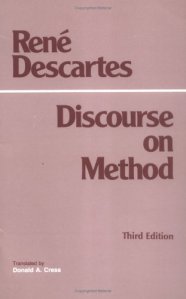 Nietzsche has dominated my philosophical readings of late, so I decided to shift gears and try a new thinker.  A quick trip to Half Price Books and I was ready to delve into Descartes.  I had some familiarity with Descartes but had never read any of his writings.  His Discourse on Method seemed like the perfect place to start.

The full title of this work is actually Discourse on the Method for Conducting One’s Reason Well and for Seeking the Truth in the Sciences.  For some reason, it is more commonly known simply as the Discourse on Method.  In this short treatise, Descartes outlines his plan to examine all of the things he held to be true and determine whether they can be known with certainty through nothing more than reason and demonstration.  He distinguishes his efforts from classical skepticism by recognizing that there are some truths that can be absolutely known.  The most basic of these is his famous “I think, therefore I am”.  He goes on to demonstrate the necessary existence and perfection of God, and then to generally discuss certain truths about man, the heavens, and the physical world.

This book has long been considered one of the most important works in modern philosophy, and with good reason.  Descartes’ method for examining the truths of the world has had a tremendous influence on the methods of later philosophers and the methods of natural scientists.  He writes with a clarity and honesty that is refreshing compared to many other philosophers.  While I disagree with some of the logic he employs to arrive at some of his supposedly incontrovertible truths, I applaud his efforts and admire his methods.  I specifically disagree with his proof of the existence of God.  It is essentially, Anselm of Canterbury’s ontological proof restated in a slightly different formula.  While interesting and apparently sound from a logical standpoint, this method of proving the existence of God requires that the individual making the argument believe in God to begin with.  It is a bit of philosophical reverse engineering.  If you believe that God exists, then the ontological proof seems valid.  If you doubt that God exists, the ontological proof will not persuade you.  This critique is certainly not reason enough to disregard Descartes’ Discourse.  I highly recommend it to anyone with an interest in philosophy.

3 thoughts on “#27: Discourse on Method by Rene Descartes”