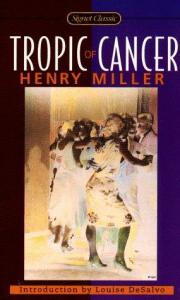 In honor of Banned Books Week I decided to read Henry Miller’s oft-challenged Tropic of Cancer last week.  The novel was interesting, to say the least.  Miller writes in a stream-of-consciousness style that is both vulgar and sincere.  The book is a fictionalized account of Miller’s time in Paris during the 1920s and ‘30s.  Although similar to Hemingway’s A Moveable Feast in subject, Tropic of Cancer is completely different in style.  Hemingway gives us a picture of the ‘30s that is full of manly men who curse only when necessary and enjoy sex without thinking or talking about it.  Miller gives us the real account, unsanitized for publication.

Miller’s language and frankness regarding sex are the sources of the outcry surrounding Tropic of Cancer.  The book was banned in the United States from its publication in 1934 until a 1961 Supreme Court case overturned the ban.  Needless to say, the language in Tropic is a bit coarse and the subject matter frequently verges on the pornographic.  I am not generally a fan of such obscenity, but there is a difference between Miller’s work and that of some other authors whose language I have condemned.  My problem with obscene language is not the fact that it is obscene.  As a high school teacher I hear all sorts of obscenity on a daily basis (occasionally directed at me).  I can handle that.  What bothers me about most examples of vulgar language is the superfluous nature of the offending words.  The individuals who make frequent use of obscene words, whether in writing or in speaking, do so to the detriment of specificity and clarity.  The words in question often serve as crutches for a writer or speaker who is too lazy to come up with a more specific (and less obscene) term.  Such words do not make statements more clear, arguments more persuasive, or books more interesting.  They only serve to offend or shock and I think that is a cheap and lazy way to get attention.

What sets Miller apart is that I don’t think his purpose is simply to shock (although he certainly did that).  I think his goal was to present an honest account of himself.  By including the obscene language, Miller is giving a more accurate portrayal of himself and all of his qualities, good and bad.  His goal is not to shock with the language.  His goal is to be honest.  He could not achieve that goal if he avoided to objectionable content.  What he created is a work of truth and a work of art, despite the obscenity.

Of all the reasons why censoring or challenging books on the basis of language or subject matter is dangerous, that is the one that moves me most.  No matter how offensive the language may be and no matter how graphic the content, art is possible.  I will criticize an author for unnecessary vulgarity.  I will give up on a book that is pointlessly graphic.  But I will not deny the right of those authors to produce such material, and I will not dismiss the possibility of art emerging from the mire.  I also won’t deny a literary masterpiece its due respect on the basis of obscenity.  Henry Miller’s Tropic of Cancer is such a masterpiece.