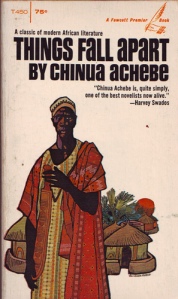 My most recent book was thrust upon me by circumstance, rather than selected for pleasure.  I discovered last week that I would be teaching the novel Things Fall Apart by Chinua Achebe to my students for the next several weeks.  The only problem was that I had never read Things Fall Apart.  A quick trip to Half-Price Books and I had my twenty-eighth book.  I am happy to say that despite taking it up out of necessity rather than choice, I thoroughly enjoyed this book.

Things Fall Apart tells the story of Okonkwo, a mighty warrior in Umuofia, a group of nine villages in modern-day Nigeria.  Okonkwo is determined to be respected and feared as a warrior and clan leader, unlike his lazy and disgraceful father.  This determination causes him to fear any appearance of weakness or womanish behavior.  As a result, Okonkwo seems hard-hearted and devoid of affection for his wives and children, despite caring for them very deeply.  Okonkwo’s determination to avoid appearing weak eventually leads him to offend the tribal gods rather than admitting he is wrong.  He is punished for this offence when his gun explodes and accidentally kills another member of his tribe.  The punishment is seven years of exile.

The second half of the novel takes place during and after Okonkwo’s exile.  SPOILER ALERT!! White men have come to Umuofia, bringing with them religion and government.  Okonkwo resists the new state of affairs and attempts to rally the other members of his clan to do so as well.  When his fellow villagers fail to respond appropriately to the outrages of the white men, Okonkwo realizes that the old ways will never return.  He hangs himself in despair, sacrificing his honorable reputation to escape this new world. SPOILERS OVER

I happened to read Things Fall Apart immediately after Hemingway’s True at First Light and soon after Churchill’s My African Journey.  As a result, I have seen three distinct perspectives on the colonization and ‘civilization’ or Africa.  I highly recommend this approach.  I enjoyed Achebe’s book more for having read Hemingway and Churchill.  Achebe’s book is definitely a landmark text.  His is a voice that cries out against the outdated view of the ‘white man’s burden’ as the proper task of civilized nations.  Things Fall Apart is a Greek tragedy transplanted to African soil.  Achebe writes in a rhythmic style that makes extensive use of traditional African proverbs.  The result is an authentic look at precolonial African culture.  By showing the human qualities shared by all men, Achebe reminds us that we are all essentially the same.  Being civilized is not the same as being superior, and Okonkwo’s tragic story throws the difference into high relief.